For First Time Since 1946, New Yorkers Have Just 2 Choices for Governor

For First Time Since 1946, New Yorkers Have Just 2 Choices for Governor 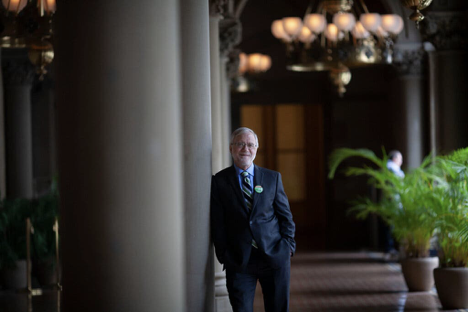 Howie Hawkins was the Green Party candidate for governor in the last three statewide elections. His party lost its ballot spot. Credit...Nathaniel Brooks for The New York Times

Howie Hawkins, the Green Party candidate for governor in the last three statewide elections, said voters are surprised when he tells them his party lost its spot on the ballot this year. He is hoping the Legislature will step in and make it easier next time. 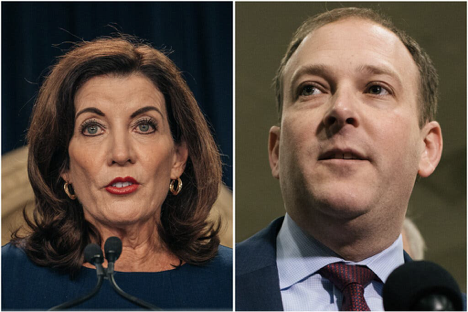 ALBANY, N.Y. — New York voters who dislike the Democrat or Republican candidates for governor have traditionally been able to cast their ballots for a long-shot candidate from any number of so-called third parties.

There are the perennials, like the Green and Libertarian Parties, and the occasional, like the Sapient Party in 2014 or the Serve America Movement four years later. And 2010 was a banner year that featured candidates from the Freedom Party, the Anti-Prohibition Party and, memorably, the Rent Is Too Damn High Party.

But this year, for the first time in over 75 years, the state ballot appears destined to offer only two choices: Gov. Kathy Hochul, a Democrat, and Representative Lee Zeldin, a Republican.

The paucity of options is largely due to former Gov. Andrew M. Cuomo, who championed changes in election law two years ago that made it far more difficult for third parties to get on the ballot. The changes to ballot access law tripled the number of voter signatures required for groups to get on the November ballot and forced political parties to qualify every two years instead of four.

The steep climb to get on the ballot has prompted legal challenges, including one being heard this week in State Supreme Court in Albany, in a lawsuit filed by the Libertarian Party. The party’s nominee for governor, Larry Sharpe, argued that the rules are so tough that only the entrenched and connected can earn the right to appear on a ballot in New York.

But even mainstream candidates have had their problems.

Mr. Zeldin and Ms. Hochul will each appear on two party lines: The governor will also run on the Working Families Party line, and Mr. Zeldin will run for the Conservative Party.

But Mr. Zeldin, an underdog in the race, wanted his name under a third party and gathered petitions for the Independence Party line. It did not end well.

The State Board of Elections invalidated Zeldin’s Independence Party application on July 12, after a challenge from the Libertarians and others. An investigation revealed such a high volume of flawed petitions — with duplicates carefully ensconced amid hundreds of otherwise valid pages — that critics say it’s hard to imagine it was an accident.

“The way the pages were distributed throughout the petition, it seems to me that it’s an obvious attempt to put together enough signatures to qualify and to obfuscate the fraud,” said Henry Berger, an election law expert and former New York City councilman. “This one is not complicated. This is simple, blatant fraud.”

The Zeldin campaign attributed the flawed petitions to mistakes made by “an entirely grass-roots effort.”

Yet Eric Amidon, who describes himself on Twitter as Zeldin’s campaign manager, signed off on all 47 volumes of the petition submitted to the state, affirming in the official paperwork that the submission contained enough signatures to qualify and listing himself as the “contact person to correct deficiencies.”

Mr. Amidon, who gave a Zeldin campaign email address on the petitions, told The New York Times in an email that he was “shocked to hear there were copies placed in the petitions” and said he was “positive no one working for the campaign made any copies.”

“We run a virtually paper-free campaign and don’t even own a copier,” he said. But Mr. Amidon and the Zeldin campaign ignored follow-up questions and wouldn’t say who assembled the petitions, or whether paid vendors helped out.

As the deadline for turning in the signatures drew near in late May, a post on the Facebook page of the far right group Long Island Loud Majority practically begged for help to get the signatures to boost Zeldin’s political fortunes.

“Anyone looking to make some extra money this weekend (30 an hour) and help out OUR NEXT GOVERNOR OF NEW YORK LEE ZELDIN. We need people to get Petitions signed to get Lee on the Independent Line,” the post said. It urged those interested to “contact Jordana at the Zeldin team” and listed an email address affiliated with Zeldin’s campaign website.

Jordana McMahon, a paid Zeldin campaign staffer, was listed as a witness to some of the signature pages, including at least one page that was used twice and got thrown out.

Emails to the Zeldin campaign website went unanswered, and Mr. Zeldin’s campaign did not respond to questions about the Facebook post or the role of paid workers or vendors in the signature drive.

Mr. Barmore said he understood that county-level Republican leaders helped collect signatures so Mr. Zeldin could get on the ballot as an Independence Party candidate. He gave his signatures to Nacole Ellis, the Republican Party chairwoman in Chautauqua County, and Ms. Ellis said she gave them to the Zeldin campaign.

It hasn’t been lost on critics that Mr. Zeldin, as a member of Congress on Jan. 6, voted against the certification of Arizona and Pennsylvania, states that President Biden won. Jerrel Harvey, a spokesman for Ms. Hochul, said that Mr. Zeldin and his advisers were “focused on deceiving voters and undermining elections, whether it’s for governor of New York or president of the United States.”

“It’s no surprise that someone who attempted to overturn the 2020 presidential election is now attempting to lie and defraud his way onto the Independence Party ballot line,” Mr. Harvey said.

Andrew Kolstee, the Libertarian Party secretary who objected to the Zeldin submission and laid out all his findings on a website called Zeldincopies.com, called for state authorities to find out what happened and punish anyone who broke the law.

“This was a deliberate attempt to defraud the voter, and those involved should be held responsible,” he said.

The Board of Elections declined to comment about whether its enforcement division would be taking any action against the Zeldin campaign. A spokesman for the Albany County district attorney, P. David Soares, said it had gotten no referrals but would defer to Attorney General Letitia James. Her office declined to comment.

In court this week, Mr. Sharpe, the Libertarian candidate for governor, tried to convince a skeptical-sounding Judge David Weinstein that his constitutional rights were violated in late June when the State Board of Elections invoked the Cuomo-era law and rejected his application for a spot on the ballot.

Howie Hawkins was the Green Party candidate for governor in the last three statewide elections. His party lost its ballot spot. Credit...Nathaniel Brooks for The New York Times

“We have a situation now where the only people who would ever want to run for office are those who are already in office,” Mr. Sharpe said. While acknowledging nearly all third-party candidates lose, he said voters showing up to the polls to say “not you two” are engaging in a high form of political protest — one that will be lost not only in races for governor but in future presidential contests, too.

The judge, who pointed to a prior federal ruling upholding the new state ballot access law, said on Monday he would issue a written decision shortly.

The Libertarian Party was one of at least seven small political parties that failed to get on the ballot this year after the onerous new ballot access law went into effect.

Not since 1946, when Republican Thomas E. Dewey defeated Democrat James M. Mead in a landslide, have New York voters been reduced to just two choices for governor. That year, according to a report in The Times, three minor parties — the Socialist, Industrial Government and Socialist Workers parties — got knocked off the ballot because of “defective nominating petitions.”

Howie Hawkins, the Green Party candidate for governor in the last three statewide elections, said voters are surprised when he tells them his party lost its spot on the ballot this year. He is hoping the Legislature will step in and make it easier next time.