“I had to double check that this wasn’t last week’s story on a Hochul contributor getting a massive sweetheart state contract. Governors may change but pay to play just gets bigger,” Howie Hawkins, a former Green Party candidate for governor, tweeted Sunday.

By Zach Williams and Carl Campanile

Political watchers across party lines are questioning another instance of apparent “pay to play” behavior involving campaign cash raised by Gov. Kathy Hochul ahead of the Nov. 8 election — this time involving $52,600 in donations linked to a company getting millions in state Medicaid business.

“There’s the appearance of a conflict of interest – even if there isn’t one,” Blair Horner, executive director of the government watchdog New York Public Interest Research Group Executive, told The Post Monday.

Records show Medical Answering Services, which manages transportation for Medicaid patients on behalf of the state, has donated more than $300,000 to the campaigns of Hochul and disgraced ex-Gov. Andrew Cuomo, who Hochul replaced last August.

The governor has faced controversy since then for amassing a massive war chest with the help of campaign donors linked to people with a wide variety of business before her administration.

And even some Democrats are concerned.

“I do support her run for governor. But I wish this kind of thing, that sure LOOKS like pay to play, wasn’t happening,” Gallagher added.

Criticism grew louder in July following revelations about how a family tied to a rapid testing company got $637 million in no-bid business from the state Department of Health while contributing around $300,000 to her campaign.

“I had to double check that this wasn’t last week’s story on a Hochul contributor getting a massive sweetheart state contract. Governors may change but pay to play just gets bigger,” Howie Hawkins, a former Green Party candidate for governor, tweeted Sunday.

Hochul has amassed more than $34 million in her campaign against Republican nominee Rep. Lee Zeldin (R-Suffolk). The incumbent governor had $11.7 million to spend compared to $1.6 million for Zeldin as of mid-July, state records show.

This money includes $69,700 each from rival real estate magnate Steven Roth and Stephen Ross amid respective pushes for state support on a redeveloping the Penn Station area and bringing a casino to Hudson Yards. 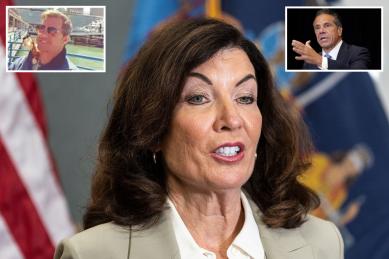 Hochul also raised eyebrows after a politically-connected brewerysuccessfully appealed a state denial for a liquor license renewal at an especially brisk pace.

“We must end corruption in Albany. Here’s another big Kathy Hochul donor who wound up with a multi-million contract for Medicaid transportation,” Michael Henry, the GOP nominee for state attorney general, tweeted Sunday.

The governor and her campaign have denied that campaign donations buy special treatment for her supporters.