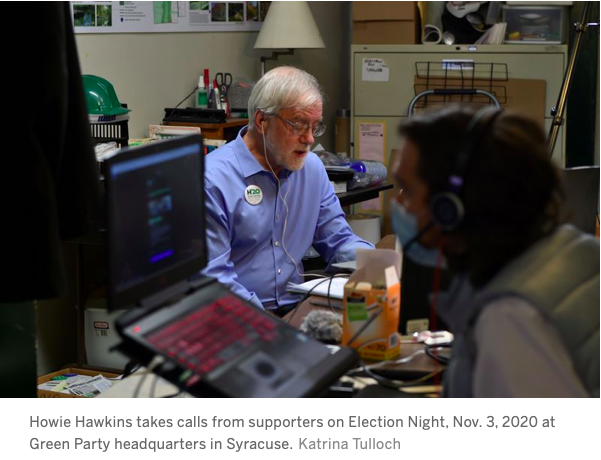 Howie Hawkins, a national Green Party leader from Syracuse who has run for public office 25 times, plans to launch a campaign today for New York governor.

Hawkins, 69, will be making his fourth bid for governor since 2010.

Hawkins told syracuse.com | The Post-Standard that he will reunite with his 2010 running mate for lieutenant governor, Gloria Mattera, in a bid to make it onto this year ballot.

Hawkins said he and Mattera were the first candidates in the nation to campaign for a Green New Deal, a proposal that has since been adopted by many prominent Democrats.

Unlike previous years, when the Green Party had its own ballot line in New York state, Hawkins will have to clear a tougher hurdle to make it onto this year’s ballot for governor.

The state’s new ballot access law requires candidates to require three times more petition signatures from voters (a minimum of 45,000) to make it onto the ballot. Those petitions are due by May 31.

The Green Party lost its automatic ballot line in the 2020 election because it failed to win the 130,000 votes needed for a party to remain on the ballot. The previous requirement was 50,000 votes in statewide elections.

Hawkins said his campaign will focus on inclusive democracy, with a strong push for New York to switch to ranked-choice voting in which voters rank candidates by preference on their ballots.

His priorities include the Green New Deal, focusing on public policy that addresses climate change and economic insecurity.

Hawkins said he also will push to pass the New York Health Act, a bill that would replace private insurance with universal health coverage for every state resident and worker.

Hawkins won the Green Party nomination in the 2020 presidential election. He made it onto the ballot in more than 30 states as he entered national politics for the first time in his political career.