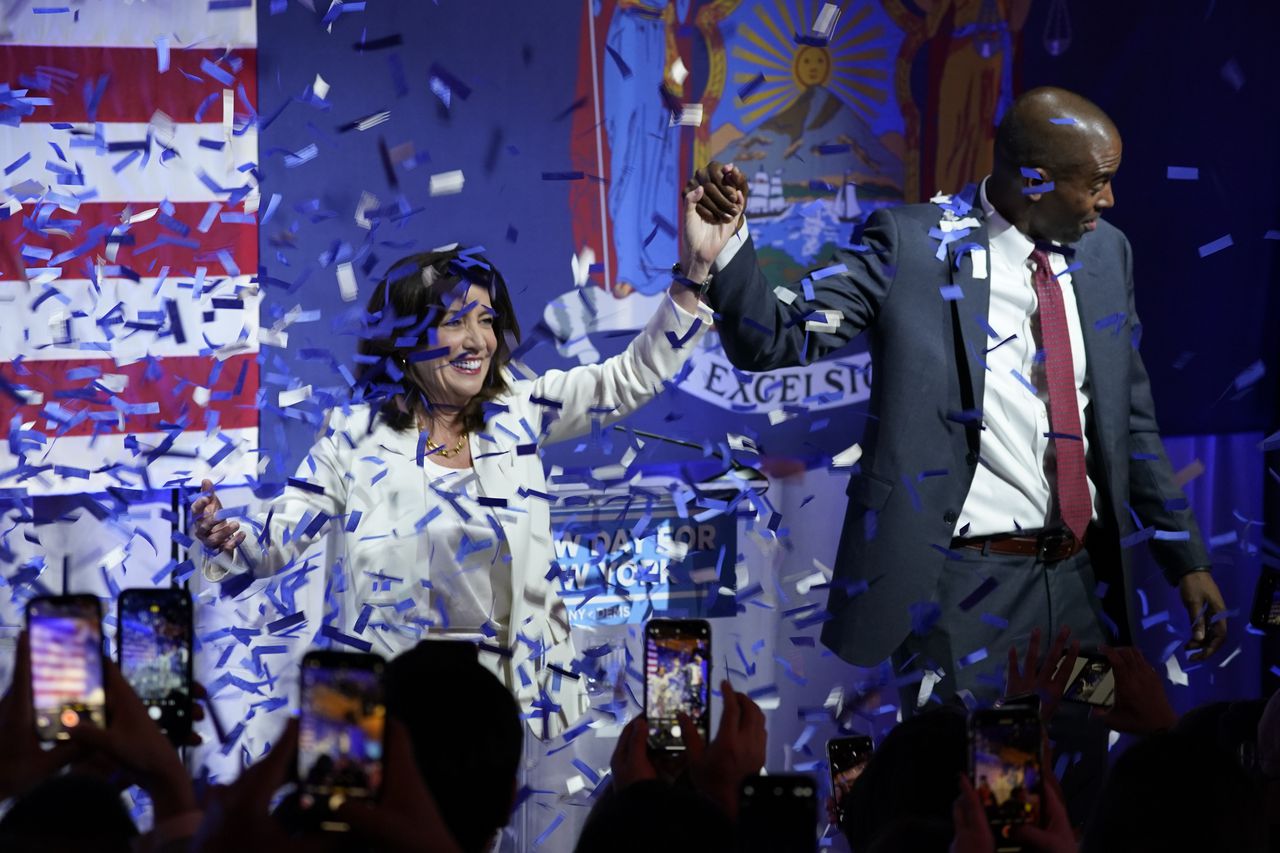 New York Gov. Kathy Hochul stands with Lt. Gov. Antonio Delgado as they celebrate their victories in Democratic primary elections, Tuesday, June 28, 2022, in New York City. (AP Photo/Mary Altaffer)APBy Mark Weiner | [email protected]
The election for New York’s governor will have only two candidates on the ballot this fall for the first time in at least 80 years after seven candidates failed to qualify on third-party lines.The state Board of Elections this week rejected nominating petitions submitted by candidates for the Green, Libertarian, Unite, Freedom, Parent, Diversity and New Vision parties because they didn’t meet new requirements for ballot access.If the decision stands, it would leave only the two major-party candidates – Gov. Kathy Hochul and Lee Zeldin – on the November ballot.It would put the spotlight exclusively on the Democratic and Republican candidates and the key issues that divide them, including guns, abortion, the Covid-19 pandemic and the economy.Hochul and Zeldin won their party’s nominations on Tuesday in Democratic and Republican primary elections.Hochul, the former lieutenant governor, ascended to the governor’s post last year after Andrew Cuomo resigned amid sexual harassment allegations. She will appear on the Democratic and Working Families Party ballot lines in November.Zeldin, a congressman from Long Island, was among Donald Trump’s earliest supporters and voted against certifying the 2020 presidential election for Joe Biden. He will appear on the Republican and Conservative ballot lines.Zeldin is also appealing a decision by the state Board of Elections rejecting his petitions for the Independence Party line.The Green Party is appealing the board’s decision to reject the petitions of its candidate, Howie Hawkins of Syracuse. The Greens and Libertarian Party are also appealing a court decision that upheld the new rules.Unless the decision is overturned, it will end a streak dating to at least 1942 where New Yorkers had at least three or more candidates to choose from in elections for governor, according to records from the state and Onondaga County Board of Elections.New York’s colorful history of third-party candidates for governor dates back to the 1800s and has included nominees from the American Labor, Communist, Socialist Workers, Right-to-Life and Liberal parties.In 2018, former Syracuse mayor Stephanie Miner was among five candidates for governor who appeared on the ballot after she helped establish a new political party – the Serve America Movement, or SAM.That year, Andrew Cuomo cruised to a victory over his four opponents. The Serve America Movement has since lost its New York ballot line.In the 1998 election for governor, the Green Party nominee was Al Lewis, the actor best known for playing “Grandpa” in the television sitcom, “The Munsters.”Lewis lost a court battle to appear on the ballot as “Grandpa Al Lewis” but still won more than 52,000 votes in his bid to unseat Gov. George Pataki.By winning more than 50,000 votes in the governor’s race, Lewis secured a ballot spot for the Green Party that it held until New York lawmakers changed the rules in 2020. The party didn’t qualify for a ballot line under the new rules.Hawkins, who has run as the Green Party’s nominee in the last three gubernatorial elections, said the changes will silence the voices of people who look to third-party candidates to make a statement with their vote.“If you want to vote for a universal public health care system, you don’t have anyone on the ballot this year that favors that except for us,” Hawkins said. “People who want a progressive voice in this election have no way to express that with their vote.”
Do you like this post?
Tweet