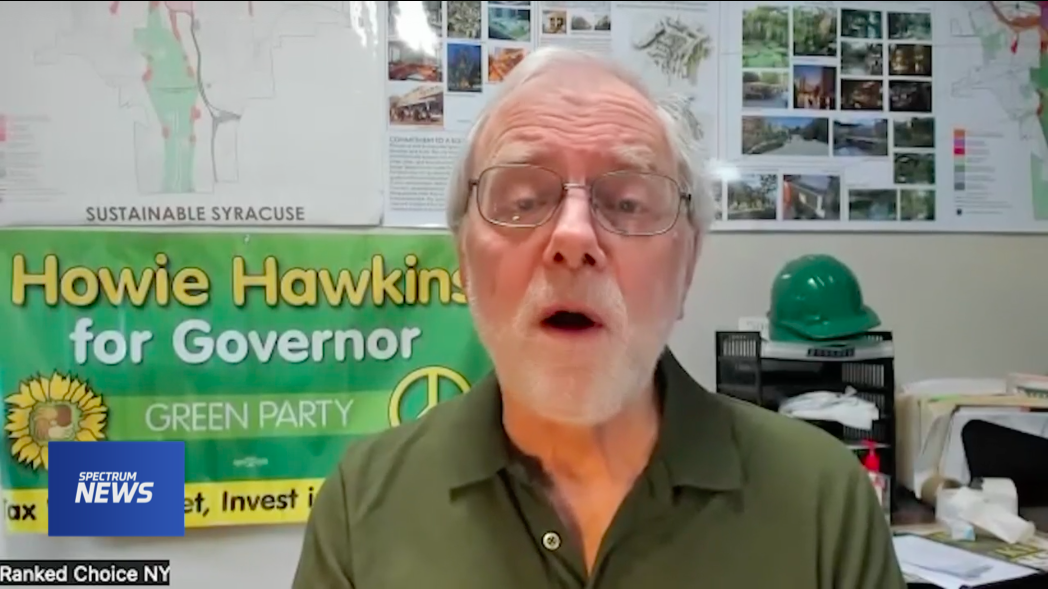 "They want to make sure this is Coke and Pepsi deciding which soda goes in the grocery store," Sharpe said.

Sharpe has been denied a spot on the ballot this year after his party, along with the Green Party, lost statewide access following the approval of new, more stringent threshold rules for qualifying.

The development has meant voters will only be choosing between Democratic incumbent Kathy Hochul and her Republican challenger Lee Zeldin in the race for governor (both Hochul and Zeldin, under New York's fusion ballot laws, are running on multiple lines like the Working Families Party and Conservative Party).

Tougher ballot access rules were pushed through the Legislature by then-Gov. Andrew Cuomo, a provision widely seen as punishment for the progressive Working Families Party endorsing actress and activist Cynthia Nixon in a 2018 primary. The WFP ultimately met the threshold, the Greens and Libertarians did not.

"They made it impossible. No one else made it," Sharpe said. "This is the first time in almost 80 years that there won’t be an independent candidate on the ballot and the judges just don’t care.”

But there are alternatives.

Sharpe, as well as longtime Green Party activist Howie Hawkins, has launched a write-in bid for governor. He views his candidacy as a way of giving voters a different choice beyond Hochul and Zeldin.

Both candidates are also trying to get an in-person debate going in Albany next week, though no venue as of Thursday was settled.

"We can’t leave this state fast enough," he said of the state's population exodus. "No one is talking about that. We’ve got the Republican saying, 'More cops, more cops,'  and the Democrat going 'we’ll just throw more money at it.’"

New York has had colorful independent party candidates in the recent past. The Green Party has run celebrities like Al Lewis, the actor who played Granpa Munster on "The Munsters." In 2010, a host of independent party candidates qualified, including Jimmy McMillan, whose "rent is too damn high" refrain at a crowded debate stage made him a viral star.

But Hawkins, who ran for governor in 2010, 2014 and 2018, believes voters are missing out on important policy debates with more mainstream choices.

"The Democrats get on their high horse about Republican initiatives to suppress voters, but they’re suppressing voters by suppressing parties, suppressing their competition," Hawkins said.