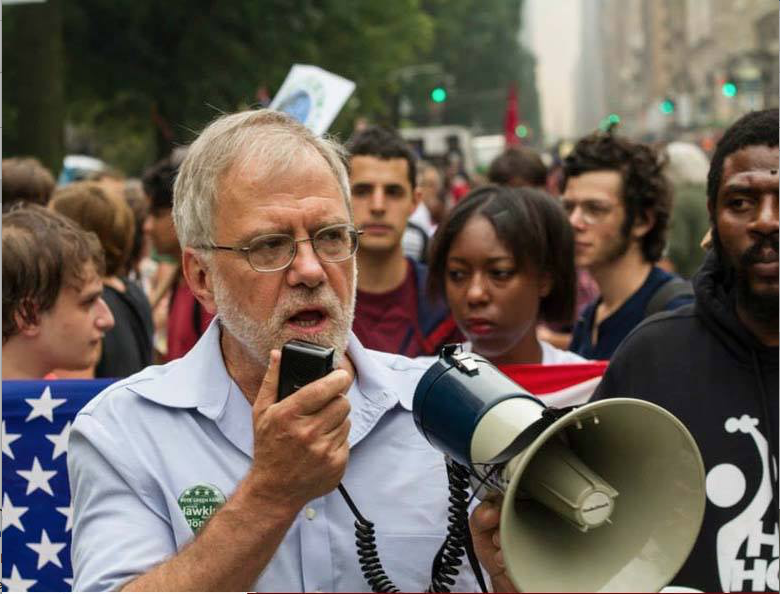 Howie Hawkins, Undefeated: The Story Behind Syracuse’s Most Remarkable Candidate

Howie Hawkins has run for office more times than anyone in Syracuse’s modern history. The 67-year-old is now in his 25th campaign.

He’ll lose this one, too.

And yet he runs. It’s part of the unique DNA of Hawkins: He’s a pacifist who loved most parts of briefly being a Marine. He’s a liberal activist and a Teamster. He turned his Ivy League education into a job loading trucks. The family he was born into is white, Republican and upper-middle class. The family that sets a place at the table for him on Thanksgiving and Christmas is Black, embedded in the history of Syracuse’s South Side.

Patience and Tenacity in the Green Party

“When’s the last time you had two truck drivers running [on a national ticket]?” Nader said in an interview. “You see how off the wall that sounds, even though there are millions of truck drivers. These are not professional politicians, they work with their hands … That’s a good combination, because people often try to pit labor against environmentalists.”

Hawkins supports defunding police departments and reallocating those funds to social services that are better equipped at responding to drug addiction, homelessness and mental health crises. But he doesn’t believe cutting funding for police departments is enough. He wants to defund the military and shift those funds to U.S. cities through a Marshall-style plan that would focus on businesses, health care, housing, jobs and schools.

“The best way to fight crime,” Hawkins said, “is to fight poverty.”

Police departments would continue to exist under Hawkins’ plan, but oversight of the agencies would be done by community groups comprised of either elected members or people selected at random to serve, similar to a jury. These organizations would oversee the hiring and firing of police chiefs and address misconduct within the departments.

He was an early leader of the anti-nuclear movement as well as anti-apartheid efforts that ultimately pressured world leaders to end the practice of legalized racial discrimination. And in New York state, he applied plenty of pressure for the ban on hydrofracking, a $15 minimum wage, and free state tuition for middle-class families.

Since the 1960s, he’s gotten pretty good at making some ideas popular and some ideas unpopular with the masses. “With almost everything, we started out as a tiny movement, but we grew and got things done. That’s the way it worked in stopping the Vietnam War,” said Hawkins, 65. “With that perspective in mind, I say let’s keep trying.”

“In addition to the fact that he is witty and funny, part of the reason why he gets the strong positive reaction he is getting from the audiences is because his comments reflect a genuine comfort with himself and an ability to have fun at his own expense,” Reeher said. “He takes the ideas and policies he’s talking about very seriously, but at the same time, he doesn’t take himself very seriously. Unfortunately, that’s a rare quality in politics.”

Bottom Line: Howie Hawkins is one of a kind

Howie comes to us from the San Francisco Bay area, where he grew up, the son of parents from the Middle West. He seems to have listened carefully to the way his mates from the Mississippi Delta spoke because he still talks with a soft Delta accent that seems at ease in his neighborhood of African American families from the South. He lives at Warner Avenue and Cannon Street.

He’s a former Marine who opposed the Vietnam War and was a member of the anti-apartheid movement in the U.S. He attended Dartmouth College and worked construction in New England, where he helped organize workers interested in energy efficiency and the environment. He moved to Syracuse to help organize cooperatives that are member-owned and “ecologically sustainable,” using a successful cooperative on Puget Sound as a model.

Of all the people who could have inspired Howie Hawkins to a lifetime of third-party politics, it’s Willie Mays who can claim that distinction.

The year was 1964, and Mays, star center fielder for the San Francisco Giants and a black man, wanted to move into an all-white community near the 11-year-old Hawkins’ San Mateo, Calif., neighborhood. “Near enough that he might come see me play at the parks we played ballgames at,” Hawkins said. “I thought that was so great. “And then the white community didn’t want him there,” Hawkins said. “They said the property values would lower.”

Even at that age, Hawkins said, he wanted attitudes to change. The Republicans, the party of his West Virginia ancestors, gave no solace – not with Ronald Reagan, still an actor, campaigning against a fair-housing act. Neither did the Democrats, he said, once they offered only two non-voting national convention seats to the Mississippi Freedom Democratic Party. “So I started looking for something independent,” Hawkins said.

He found it. Or more accurately, founded it. Twenty years after his political epiphany, Hawkins was a delegate to the convention that brought together scattered Green committees from across the country. And in 1991, he was one of four people who announced the formation of the Green Party-USA.